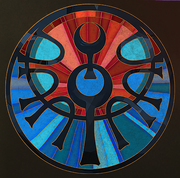 The Nightwings are one of the original nine Triumvirates. Their sigil is a cresting moon.

Long before the events of Pyre, the old Nightwings included Volfred Sandalwood, Ti'zo, Oralech, Erisa, and Brighton. Brighton was the first to regain his freedom, then Oralech. However, once Oralech was supposed to enter the Shimmer-Pool and return to the Commonwealth, Erisa betrayed him and entered herself, dying instantly. Oralech fell from Mount Alodiel and his body was never recovered. Volfred and Ti'zo parted ways, and the Nightwings were no more.

Started by Volfred just before the events of Pyre, the Nightwings initially consisted of just Jodariel, Hedwyn, and Rukey, along with Tariq, though he does not participate in the Rites. After you are exiled from the Commonwealth, Hedwyn invites you to join them as their Reader. While travelling through Jomuer Valley, you find a stowaway, and the Vagabond Girl joins the Nightwings once you name her.

"What is a life without an adversary? If not for forces that conspire against the will, life would be devoid of its innateness, the desire to overcome.

Thus, when we the Eight at last each fashioned a triumvirate based on our own ideals, we realized a void still needed to be filled, as the night sky needs moonlight.

We Eight were united. Our triumvirates shared our affection. They needed us to set them all against a common foe.

Thus did we form the Nightwings, a triumvirate envisioned to exceed them all, both through means mortal and divine, and given undue favor in each turning of the cycle. They are the adversary we all face."

-The Book of Rites, Chapter VII, Page 145, In the Words of Ha'ub the Swallow, the Accursed

The name of a triumvirate in blue. It seems your fellow exiles have assumed their identity. As Reader, you hold sway over the group.

Notes: Ours is the triumvirate against which all the others are judged.

This article is a stub. You can help Pyre Wiki by expanding it.